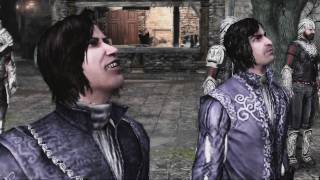 For those of you who don’t know, I co-wrote the video game ASSASSIN’S CREED II. A very exciting gig to be part of. Just last week, one of the sequences I wrote solo was released as a DLC (Downloadable Content) – and to promote it, a trailer was released. You have to watch it. This is very cool. I love seeing all my dialogue and action scenes rearranged into trailer moments. My favorite is a line taken from the beginning of the sequence — when Ezio hears he’s going to be helpi

Okay… Not This… But…

No tags yet.
bottom of page